1d. The Lysosome - The cytotoxicity hypothesis 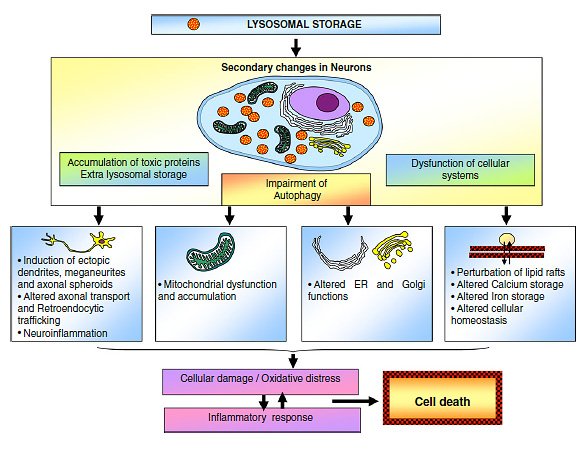 There are several theories explaining why the lysosome becomes dysfunctional. The most prominent one is the cytotoxicity hypothesis, which shows that when you have a substrate that accumulates within the lysosome at some point the lysosome will become overwhelmed and there will be spillage of those substrate and other components from the lysosome into the cytoplasm of the cell. That will create toxic protein accumulation, impairment of the normal function of the lysosome and dysfunction of the cellular system in general because all of the spillage occurred - now occurring within the whole cell and not just compartmentalised in the lysosome. So when these derangement occur in different tissue the nervous system is the most sensitive one and you will have induction of ectopic dendrites and meganeurites and axonal spheroids, altered axonal transport and neuroinflammation. Mitocondria can also be affected and can become dysfunctional creating a secondary energy metabolism failure. There will be altered endoplasmic reticulum encology function, and there will be perturbation of the other function of the lysosome that were recently discovered including lipid raft, calcium storage, iron storage and cellular homeostasis in general. This will cause cellular damage, oxidative stress and ultimately cell death.